Description of my rubber slave's orgasm

After much anticipation, i finally had the chance to meet SIR at a dungeon party in North Carolina.  HE is an imposing man with a gentle and affectionate way of introducing HIMSELF.  The dungeon was crowded and busy, and SIR did not have an opportunity to use me, but HE promised HE would do so at the next meeting.
i also met SIR’s slave-pup, who was in rubber and a straightjacket, with an electric plug in its ass.  At one point, SIR left me alone with HIS slave-pup while HE tended to other things — and i was allowed to paddle slave-pup’s balls.  When i reached across slave-pup’s chest to rub its nipple, i inadvertantly bumped the controls to the ass-plug and cranked up the intensity.  The slave-pup reacted with wide-open eyes and muffled scream into its gag.  It took me a moment to figure out what had happened.
Later, after SIR returned, HE removed the slave’s chastity, which had been in place for many, many weeks.  Then, with a small crowd assembled, SIR dripped some lube on the slave’s stiff dick and slowly stroked it, speaking gently to the slave.
Soon, the slave’s reactions made us all realize the moment had arrived. The slave tensed and a creamy glob of cum squirted out in a high arc, splattering on the slave’s rubber-covered thigh.  But, of course, SIR was just getting started.  HE continued stroking, and, moment’s later, accompanied by the slave’s muffled cries, a second eruption sprayed another wad of cum onto the slave’s leg.
SIR, maintained HIS stroking rhythm, working slave’s sensitive cock.  The slave could be heard whimpering saying through its gag:  “It hurts, SIR!  It hurts!”
“I know,” SIR reassured slave.  “I know.”  And the stroking continued, as we all watched.


I found this picture on Tumblr of boy paul taken by someone else during the weekend. You can find boy paul on Recon as chubbyhog and follow him on Tumblr at http://bearlust.tumblr.com 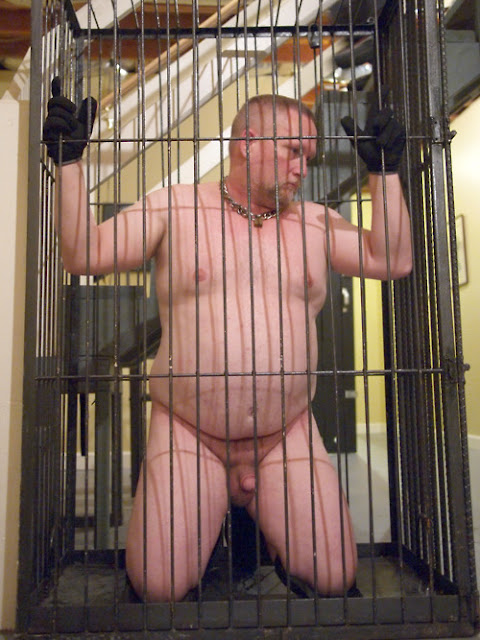