More Time In The Sleepsack

Most of the gear is still packed but the sleepsack is a very versatile tool for bondage and the slave loves it. The slave put on rubber shorts and shirt and I put the neoprene cocksucker hood on it. I zipped it up inside the sleepsack with it's head at the foot of the bed. I wired up the electro plug and the slave started moaning.

the slave was in rubber slave heaven. I laid down on the bed with slave and talked with it a bit, expalining that it was time to intensify the level of training it was receiveing. I also mentioned I might let it come next Wednesday (if its a good slave). 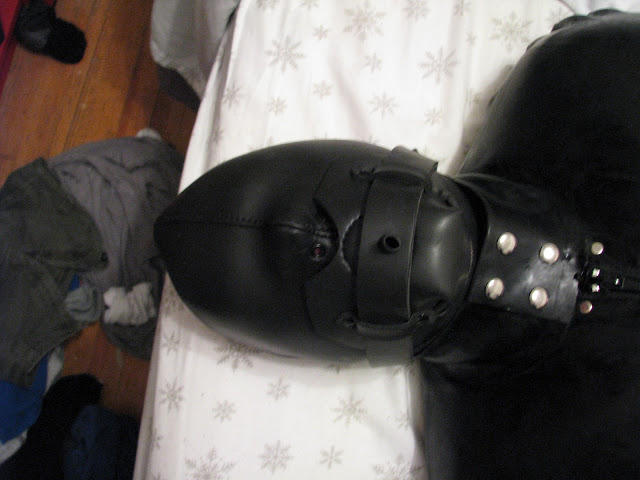 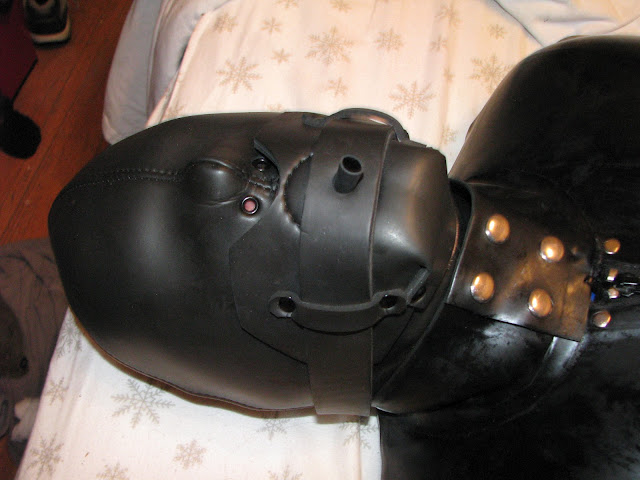 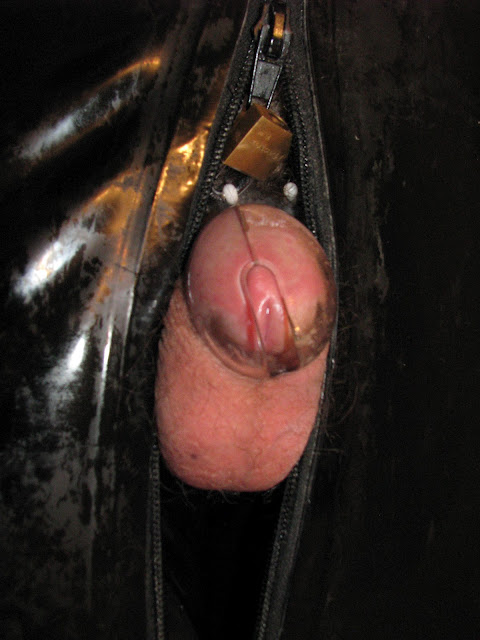 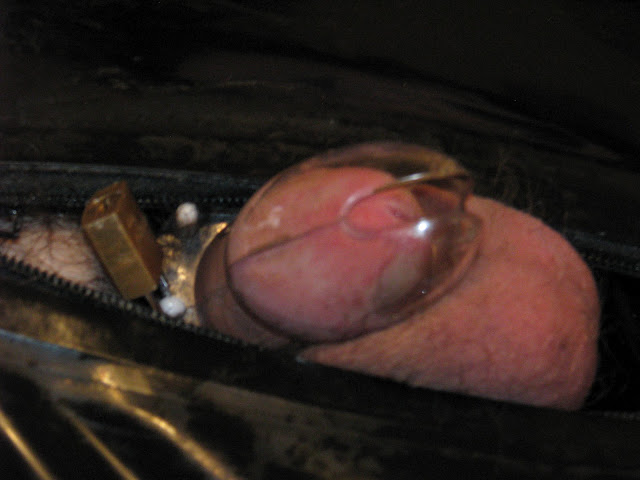 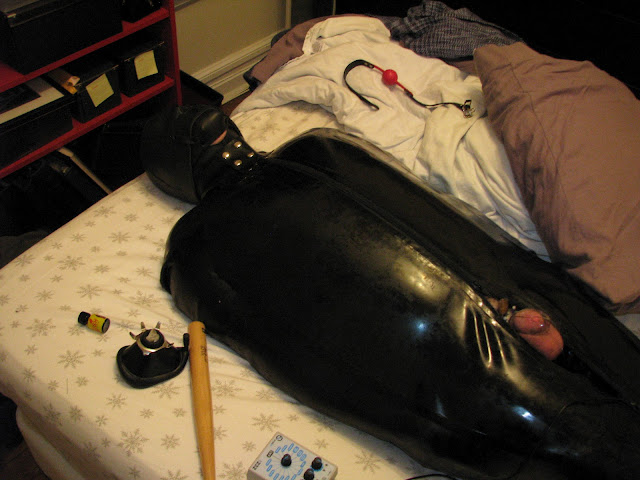 Here is a video of the slave energeticaly humping the sleepsack to no avail since its cock remained locked.

I was off from work today and I had plans to accomplish many projects. I woke up around noon (I worked late last night) and was all set to grab some coffee and grub and get to work on the mountain of boxes in the front room.

Unfortunately while I was drinking coffee I checked my e-mail and there was a message from the slave I call pig. it sent me a fictional story it had written and the pig stated I was the inspiration. I went ahead and read it and that just re-directed my day. I was aroused and my rubber slave was at work. I started thinking about ways I could abuse him before I had hims service me tonight.

I started searching the Internet for hot pics and videos. I kept thinking about pig and making its story a reality. I used some poppers and rubbed my crotch, but I didn't want to waste a load by not feeding it to my slave.

I started working on another chapter of my pigkeeper story. I was trying to keep busy but all my thoughts and activities revolved around sex, rubber, bondage etc. It was a very challenging afternoon.

Thirty minutes before my rubber slave came home I put on my new Wesco Boss Boots and leather gloves. I waited by the front door for the slave to walk in (I startled it, not a hard thing to do) and I had the slave get down on its hands and knees and lick my boots. then I made it nuzzle my crotch a bit before I instructed it to go put on some rubber. The slave is getting ready now.

Here is a video from last week's the rubberslaves sleepsack bondage session. Enjoy!
Posted by The Bondage Boss at 3:16 PM No comments: 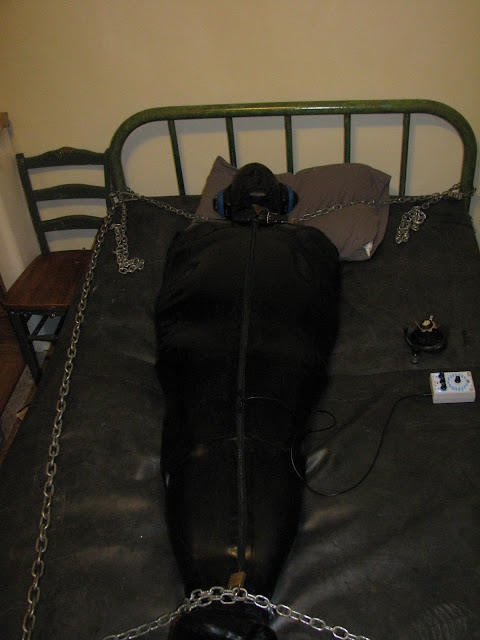 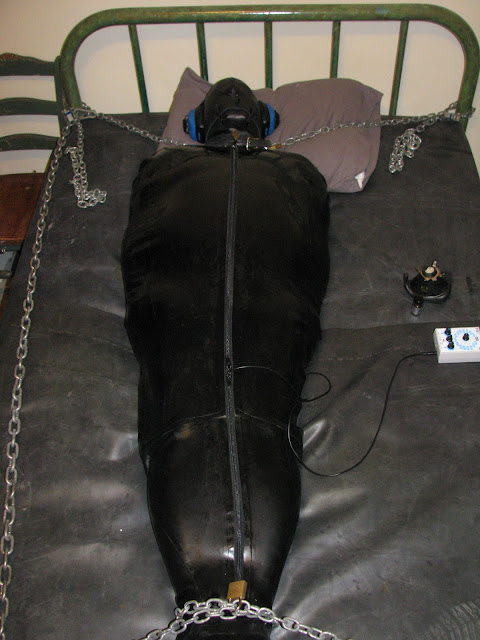 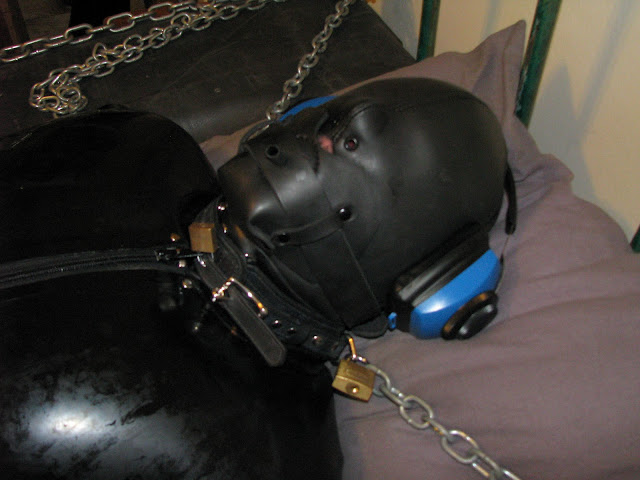 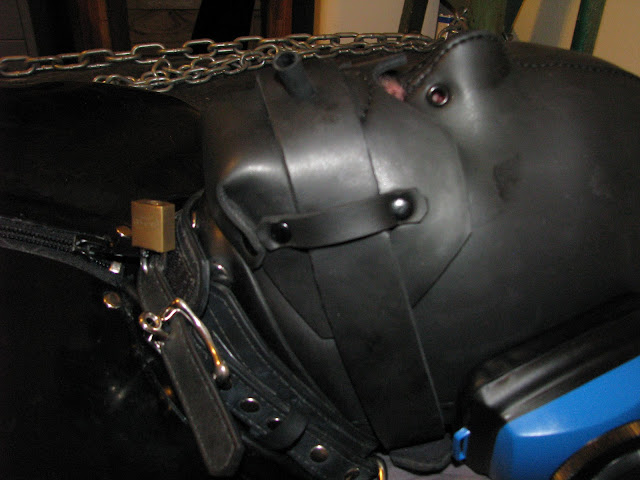 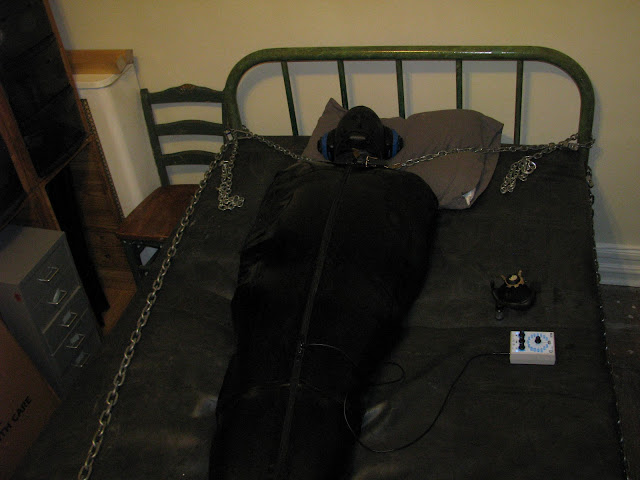 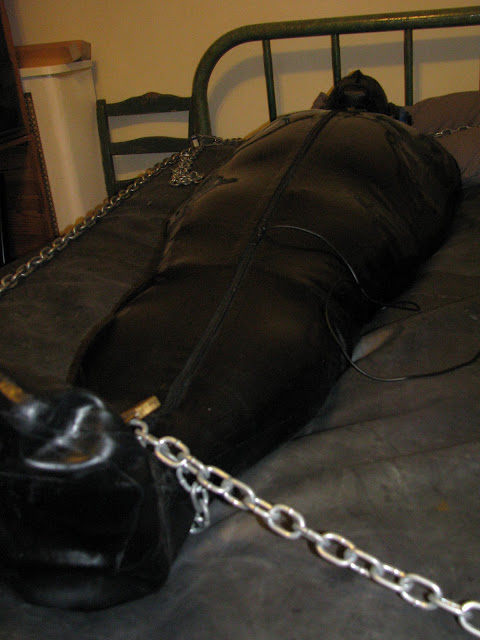 Here is a video clip of the slave's Monday Night training session.
Posted by The Bondage Boss at 3:59 AM No comments:

So we had our first training session in the new space. Which, except for the bed and the heavy rubber sheets, is still fileld with boxes.

The slave was chained to the bed, hooded and gagged. I had it wired up and gave it some popeprs and left it to struggle for 30 minutes. When I came back it was feeling pain in its balls from the electro and the rubber stretcher so, after a little ball beating, I gave it some relief.

Then I went back to beating its balls with both the ping pong paddle and the miniature baseball bat. Both excellent tools for ball torture.

After 20 minutes of torture I freed the slave so it could suck me off and then prepare a late supper.
here are some pics. Video will come later. 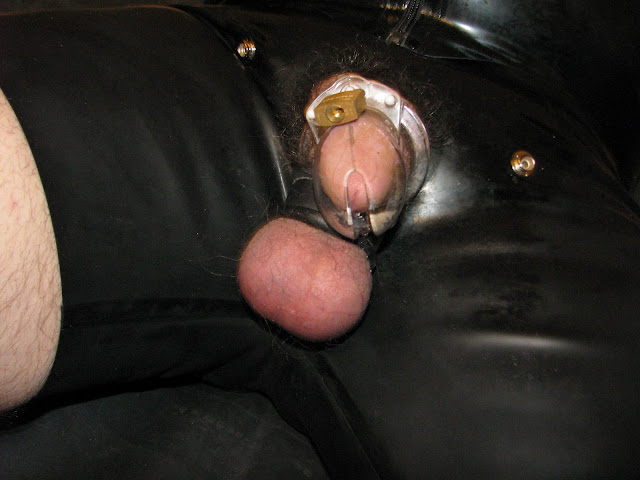 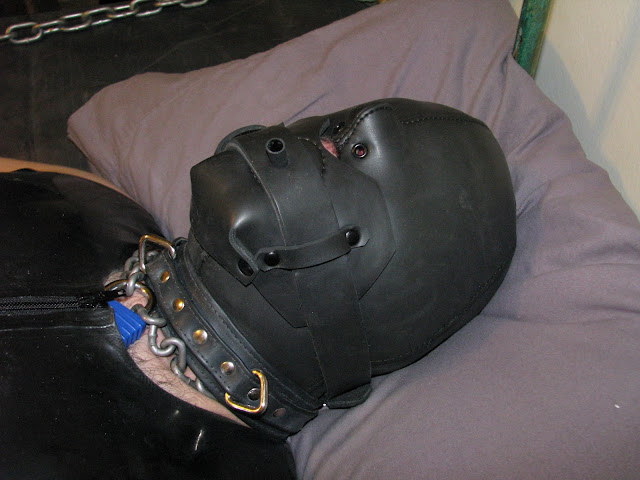 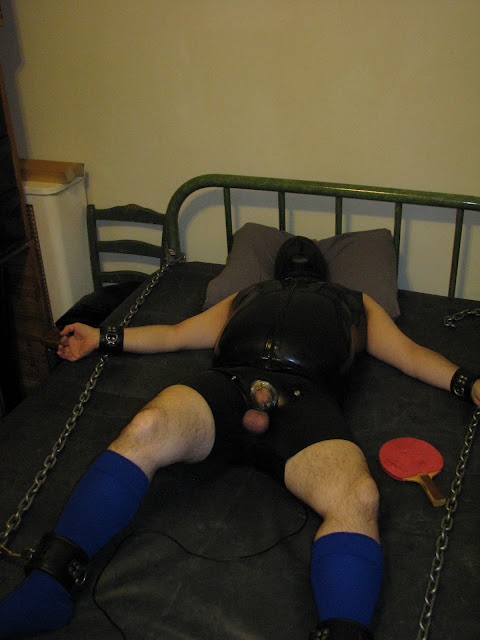 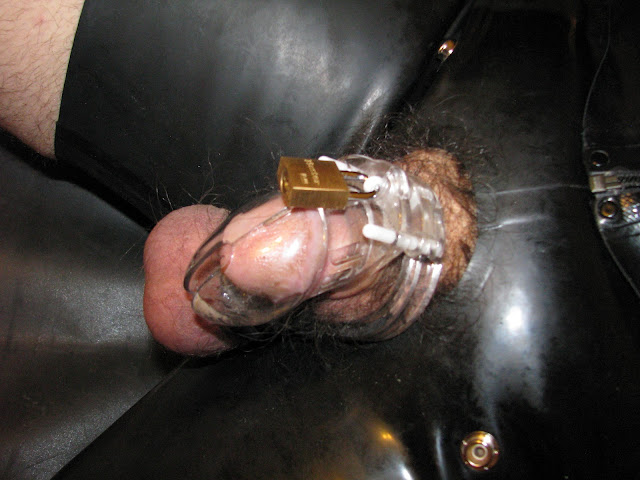 Posted by The Bondage Boss at 10:07 PM No comments:

The slave had a busy day at work and then met a fellow sub for coffee after work I felt that it was important to give the slave some down time so when it arrived home I had it put on rubber and I put it in some bondage with the electro plug in its hole.

It is in rubber shorts and shirts. Blue rugby socks (the restraints did not fit around the boots). CB-6000 chastity device and electro plug. It has on a neoprene cocksucker hood and neoprene mouth gag and a rubber collar. It is restrained to bed with restraints, locks and chains. I also added some electro ball straps to its testicles. 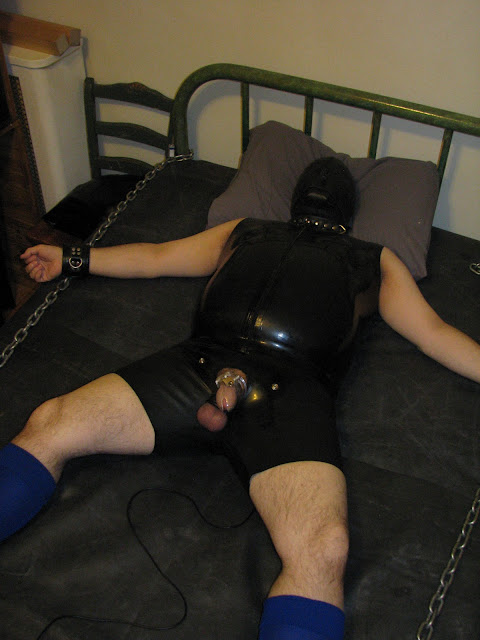 I gave it some poppers and I'll let it rest for awhile before I go in and give it a ball beating session.
Posted by The Bondage Boss at 9:05 PM No comments:

A chastity device has one function, prevent the trainee from physical touching it's genitals and allowing anyone else, who does not have permission, from touching them. Some devices go further and prevent a chastity slave from achieving orgasm, but an industrious slave can usually find a way if they work at it hard enough (pun intended).

Training a male chastity slave can be challenging becuase of the one size fits all nature of chastity devices. The device must be restrictive, yet comfortable for the slave to wear. In the past 15 years the number of devices introduced to the market have been many.

They devices come in many shapes, sizes and materials. One of the most popular was the
CB-2000/3000/6000 series. I used these a lot until the silcon Birdlock came along. Sold by Mr. S under the name Boy Trainer this device was revolutionary. It allowed for long term wear without irritation. My slave purchased one on his own and was very happy with it.

The Boy trainer 2.0 was introduced and we purchased one in late September and I kept the slave in it for regular intervals until it failed by tearing at the bottom. We contacted Mr. S and without a hassle they replaced it.

I put the slave in the replacement device on January 28th and everything was fine until Monday February 20th and then the same thing happened, the slave was taking a shower and using a Q-tip to clean itself when the device tore again. The slave swears it was putting no special strain on the device when it ripped. 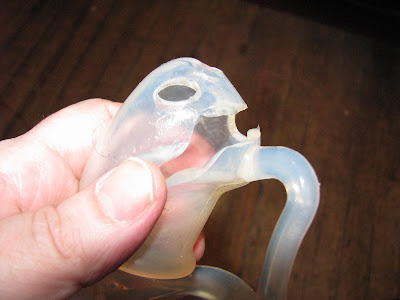 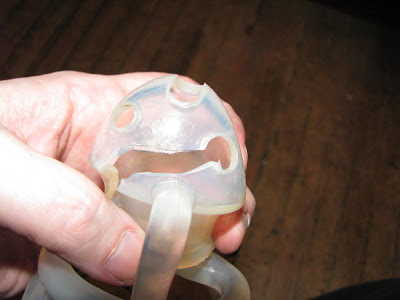 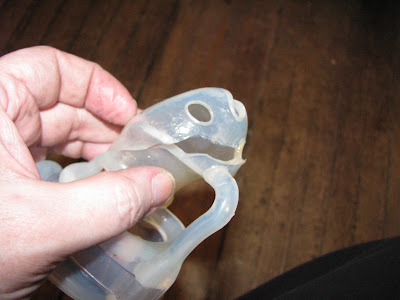 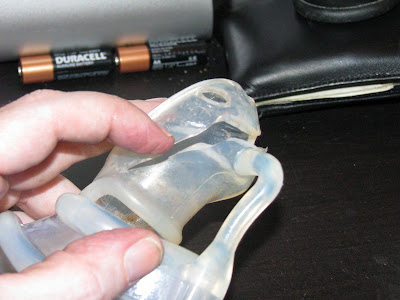 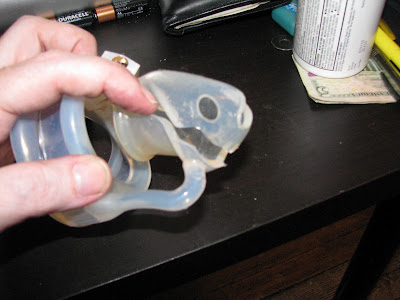 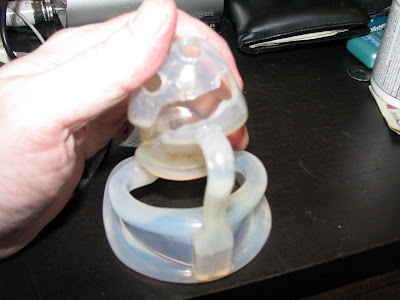 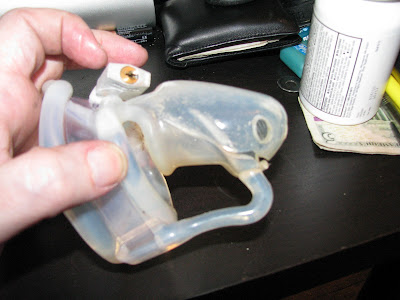 The slave was very upset. it needs to be kept in chastity. it feels better when its slave cock is locked up and under my control. The slave contacted me at work and explained what happened and was on its way to The Leatherman in NYC to purchased a new CB-6000.  The slave had it waiting when I returned home and I locked the slave up again. The slave showed great restraint by not touching itself during this period of freedom.

The slave has been locked up for 39 days and I may provide it release tomorrow evening after a rubber bondage electro training session.

In the meantime I will have the slave contact both Mr. S and the Birdlock company and see if we can get a refund or a replacement.

I have not heard anyone else experience any problems with this device so I would be curious to know if others have used the device and had it tear.
Posted by The Bondage Boss at 7:43 PM No comments: