Another Dore Alley (Up Your Alley) Street Fair has come and gone. This year's was about getting reconnected with old friends and making some new ones.

It was a busy weekend with more catching up than bondage, but we had some fun too. On Friday night we had dinner with a new friend John. He is Leatherrestraint on Recon. he was in town for all the festivities and it was good to finally meet him.

On Saturday our friend Steve held his annual party for the SF leather men and that was a lot of fun. then we were off to the International leather Sir/Boy contest being held at the Holiday Inn. Then we ended the night stopping in at The 15 Association play party. This was the first party I have been two in months and it was great to be out and see all the hot action.

On Sunday we went to the fair and met up with many friends and then headed over to Stomper's where I was measured and fitted for a pair of 16" Wesco Boss Boots. They should arrive in about 12 weeks so look for some pics.

Then it was back to the house for the second annual after Dore dinner. Our good friends Will and Bruin came with two friends, a rubber boy from SLC who went into the sleepsack and then into the bondage box for two hours and another friend who did a little hood exploration while he was here.

Pups morty and paul were here (Morty has become an alpha pup and was holding paul's leash). Pup paul was instigating some trouble so he needed to be restrained with gag, mitts and a blindfold. He pushed out the gag, so later he was muzzled! 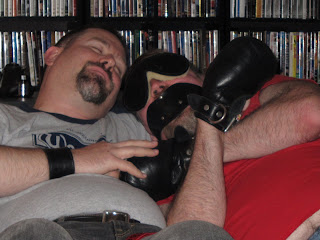 Even our roommate Charlie got some play when Bruin locked a punishment hood on him. He seemed to enjoy it! 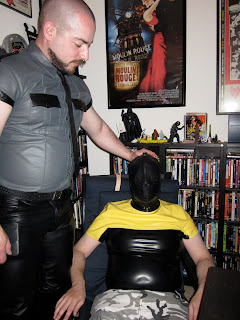 I have been feeling uninspired lately so this was just the kind of relaxed time needed to get me going again. I also got around to making the bondage space usable again. It still needs some organizing so maybe I should get some boys here and put some shackles and muzzles on them and put em' to work!
Posted by The Bondage Boss at 5:36 PM 1 comment: