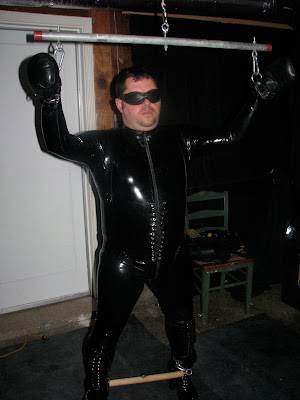 I took pup downstairs to the training space this afternoon. First he dressed himself in his rubber catsuit, rubber corset and 4 inch heel, shiny latex, lace-up rubber boots. I added thick leather fist mitts and ankle restraints. I attached his writs to a spreader bar and pulled them up over his head.
I then used another bar to separate his legs. He was blindfolded and the I added a plug gag and muzzle. I proceeded to alternate beating his balls and stroking his cock, both of which were encased in a rubber cock and ball sheath. While doing so I kept feeding him poppers.
pup soon discovered that, while his boots looked nice, they made it difficult to stand. He was suffering as I continued to work his balls and slap his ass. Finally I gave him a break and attached his legs together. I also removed the muzzle and replaced it with a MR. S collar and ball gag set. The CBT torture continued for a while, until I decided to take pup upstairs and work him over on the bed. 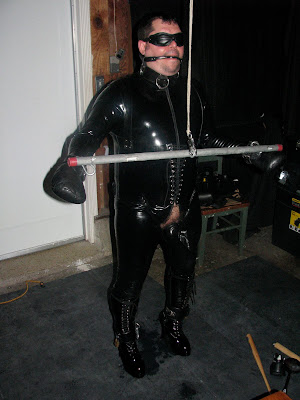 Playtime was interrupted by an unexpected visitor so pup had to wait till 11 PM before he was allowed to get some relief.
Posted by The Bondage Boss at 5:58 AM